If you care about how your photographs are viewed by others, you’ll want to keep the screen you use for editing calibrated at all times. In this post I explain why.

Why Calibrate Your Photo Editing Monitor?

If you regularly upload photos to social media, you’ll likely have noticed that they look different depending on whether you view them on your computer or your phone. This is because the screens on different devices all treat color, brightness, and contrast in hugely varying ways. What’s more, even in the unlikely case that a screen was well calibrated before it left the factory, on many models these default settings will tend to shift over time anyway.

To make matters worse, the screens on modern computers, tablets, and phones are designed not so much for accuracy as they are to make us all believe that we are great photographers. Think about it; manufacturers of electronic devices want people to buy their products, and people are more likely to do so if they are satisfied with the results they get when using those products.

And what satisfies the average non-photographer is taking photos that “pop”. Photos that look better than when using a competitor’s device. In fact, part of what people really mean when they say that a certain phone has a great camera is that it has a screen that makes photos look good. In practice this means that colors tend to be oversaturated and the contrast ramped up for maximum impact. Now even your uncle Mike can convince himself he’s Steve McCurry.

That’s fine for most people, at least when looking at photos. But what happens when you try to edit your images on a screen like this?

Well, for a start, colors you thought were saturated turn out not to be. Images you thought were contrasty or brightly exposed actually aren’t. It’s just the screen making them look that way. Which is perfectly OK as long as those photos are viewed on the same screen all the time.

I’m guessing you don’t take photos just to sit and stare at them yourself, though, right? You want other people to look at them too. Why go to the trouble of editing your photos if you can’t be sure that others will see the same results?

OK, but if everybody else will also view your photos on a modern device set to default settings, surely it’s better that you edit them to look good on exactly this type of screen?

That seems logical, but the problem is that we’re not talking about merely one kind of screen. While the trend is for modern displays to accentuate contrast and saturation, they all do this to different degrees, and with a different color cast. And as I mentioned earlier, these settings may even change over time.

Although Apple’s products generally manage color much better than Windows PCs, even Macs can come with quite different monitors depending on when they were produced. In any case you can never be sure what kind of screen viewers of your photos will be using. But by starting at a neutral point you can avoid any really extreme variations in color.

As an example, imagine your monitor has a strong blue color cast. Here you will likely “correct” your images by warming up the white balance. But now anyone who views your photos on a properly calibrated monitor will see them too warm. And to viewers with a screen that already has a warm color cast, they will be even warmer still.

As another example, if you use a screen that is super contrast-y, it may not show you all the detail present in your RAW files. And if you can’t see that this data is there, you may end up editing the image in such a way as to permanently remove it without even knowing it. If that happens, even somebody looking at your photos on a correctly calibrated monitor won’t be able to see it either. Why pay out a lot of money for a good camera if you don’t make use of all the data that it’s capable of capturing?

Related: The Food Blogger’s Guide to Optimizing Food Photos for the Web

While screen calibration is important for anyone who cares how their photography will be viewed by others, it becomes even more critical the moment you start working for clients. Especially print clients. Whether you are producing shots for packaging, editorial, or print advertising, it’s almost impossible to deliver a well-done print job if you don’t have your screen calibrated in the same way as the printers.

Also, those who outsource the editing of their photos to professional retouchers will need to take particular care that both their monitor and the retoucher’s are always calibrated. How can you judge whether the retoucher has done a good job on the colors if you can’t see what they see?

I once saw a photographer’s website where they’d made very obvious use of Photoshop’s Clone Stamp tool in the dark areas of some images. To whoever did the retouching, we can probably assume that these areas just looked like pure, solid black. But seen on my calibrated monitor, there was a clear difference between the black used to do the retouching and the dark grey areas that had been retouched. It wasn’t a good look.

To avoid this kind of problem, it’s always better to do your editing on a correctly calibrated monitor, and then check how your images look on other “consumer” monitors before deciding on the final edit.

The reason screen calibration is necessary is because computers and devices are not able to objectively judge their own performance from outside. It’s a bit like listening to a recording of your own voice; as we normally hear our voice vibrating around inside our body, it can sound strange to us when played back externally.

As a monitor can’t see the colors it produces, calibration works by using an external device to record and analyze the output of the screen. Usually it’s a small sensor that you place directly onto the screen, which then works in tandem with dedicated software to meter the light coming off the screen and adjust the display settings accordingly.

You can calibrate your screen using a tool called a spectrophotometer, where spectre = spectrum, photo = light and meter = measurement. You can pick up one of these kits these days for a relatively low cost, but the payoff in the long run is huge.

My personal preference is the SpyderX, which allows me to do a full calibration of my screen in under 5 minutes, and a quick “ReCal” once a month.

Inside Food Photography Academy, there’s a complete video tutorial walkthrough of how to calibrate your monitor with the SpyderX.

Screen calibration is certainly a controversial topic, bringing up many different opinions about it’s necessity. Let me know in the comments what yours is! 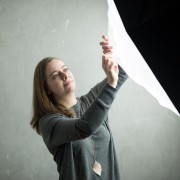 thank you so much for this, I have recently updated my CC Lightroom and noticed that when I export my photos to my Mac, they become much darker and I’m not sure if Lightroom has changed something? I end up having to over-expose them it seems to make them look OK when exported… Or whether it is the calibration, so this is great thank you.

Hello Amy! I have exactly the same problem! I have to do all my edits, than I over expose otherwise the exported photo would be too dark… I also use Lightroom CC on a Mac, export to my iPhone 7.

Hi Lauren, always with such important details that can make a huge diference. Thanks so much for sharing and explain it so clearly. Keep well

Oh Lauren, you have no idea how timely this blog post is! I’ve literally been tearing my hair out recently because of the difference in colour when I upload my images from my laptop to my phone! White balance has been an absolute nightmare for me! Thank you for your post, I’ll definitely be checking out this colour calibration gadget.

Hope your post-op recovery is going well too. Keep well and look after yourself! xx

I’m SO happy to hear how useful this has been for you Tania!